Open science needs no martyrs, but we must recognize the need for reform

You’ve been a vocal advocate of the open access movement already in your home country Finland and in various European fora. What’s so great about open science? Why is it supposed to be overall good for society?

I think we should first admit that the way we’ve been doing science is a little absurd. Over the second half of the past century, the outcomes of publicly funded research became the property of multinational companies operating in the scientific publishing business. These companies have consolidated, creating ever fewer and bigger publishers. My salary is paid by a university supported by taxpayers’ money, and I get research funding from the ERC, so ultimately also from the taxpayer. I conduct my research and I write up the results in an article, which… is then essentially gifted to a company that didn’t pay for my salary or my research. Such an article would not be accessible for most people, because to read you must pay a prohibitively expensive subscription. It’s absurd that taxpayers pay for all this and have no access to the outcome. The result is also that good, solid science stays behind paywalls, while lots of misinformation is openly accessible. That is now finally changing with the success of the open access movement.

…the result is also that good, solid science stays behind paywalls, while lots of misinformation is openly accessible.

So, the advantages for taxpayers and society at large seem obvious. But what’s in it for the scientists?

Researchers have largely been shielded from access problems because we generally work in institutions whose libraries subscribe to these publishers. However for people working outside of well-funded institutions or in developing countries – it’s another story. But even we who are privileged typically have access merely to PDFs with text and embedded images of varying quality. I can read a short description of the used methods, but I often must take the findings at face value. I have no choice but to trust that the researchers did a proper job, that they were careful, meticulous, that they haven’t committed fraud or embellished their results.

This may perhaps work well for mathematics research where you can verify each step of the proof and the trust is built into the language of mathematics. Yet in any other discipline of science – unless you have access to the full methods, the underlying data, and the increasingly important code – how can you really trust the conclusions?

This is where open science is simply better science: taking all the steps that lead to a finding being transparent and accessible for anyone to verify. We have recently had crises of reproducibility in some disciplines. Findings were published and believed in often for decades, and now researchers can’t get the same results anymore. Perhaps with open science we could have avoided such failures, which have also contributed to a crisis of trust in science and expertise.

this is where open science is simply better science: making all the steps that lead to a finding transparent and accessible for anyone to verify.

Where do you see obstacles? Is there a tension between compliance with open access requirements and making a scientific career, especially among young researchers, researchers at less affluent universities or countries, or perhaps some scientific disciplines?

Anyone can practice open science and publish open access. In all disciplines there are options available, even without payment. The main problem holding back researchers, not only those in less privileged positions, is the fact that we are all tied to a system of research evaluation based on prestige. To have a successful career I am expected to publish in certain journals, and to a disturbingly high degree it hardly matters what I publish as long as it carries that branding.

The most prestigious journals are usually owned by private companies. The research community has sleepwalked into a situation where decisions on who gets hired, who gets promoted, who gets funded, are effectively outsourced to private companies who sometimes use very non-transparent and questionable ways of increasing the metrics that are so captivating to us. By now it has become an acute case of Stockholm syndrome.

Some scientists might further worry that if they publish very openly all of their methods and data then their competitors will have an advantage over them. That might in some cases be true, but only from a selfish career perspective. On the other hand, if you are not publishing everything that is necessary to verify your work, then you are not really doing rigorous science. On top of that we have preprint repositories where you can publish your work almost immediately without the risk of getting scooped. So this culture and the resulting regime of evaluation are the main obstacles to open science.

How can this culture be changed? How can we make sure that those who evaluate research results don’t look – even unconsciously - for household names of periodicals? Should scientists still cherish those moments when their papers make it to the covers of established journals?

I recently published a cool piece of science from my ERC project that I was very proud of. We tried initially to submit it to a very prestigious journal but they said it’s not novel enough – a subjective judgment – and we ended up publishing this paper in a respected journal, just not as prestigious. The research didn’t change, it was exactly the same article. And I caught myself thinking “Oh, it’s not worth a press release, because it’s not such an impressive journal”, but then I said to myself “No, it doesn’t matter, it’s the same research, and I’m going to do it.” Luckily, the university agreed. So yes, it is hard and this mentality change will take time. And I’m not sure if people who are now decades into their scientific careers and never thought about these problems can change their minds.

At the same time, we can’t just accept the status quo. Initiatives like the San Francisco Declaration on Research Assessment (DORA), which the ERC – albeit late in my opinion – did sign this year, are really important steps. The ERC has always been good at research evaluation, but I guess it took some time to put all the procedures into place, train the evaluators, have clear instructions, and monitor it, so that DORA could be formally signed. But this public commitment still mattered and it was an important signal.

In your view, does the ERC do sufficient work to support grantees in their efforts to practice open science, and if not, what could the ERC do better?

This is a bigger problem across the research system. There are more and more – in my opinion well-justified – open science mandates coming from the European Commission and other funders. But there is not a lot of support to actually follow through.

I don’t know if it should be the responsibility of funders or institutions to employ, for example, data stewards who could help researchers fulfil such open science obligations. What the ERC and other funders could potentially do is to place additional conditions in the grant agreements on the host institution to provide support to the grantees for open science activities such as data curation. Certain open-science aspects of ERC grant proposals could be recognised as increasing the overall scientific excellence of the proposal, even if it is not a formal evaluation criterion.

The ERC should also encourage its grantees to use the Open Research Europe platform, which is an excellent modern service, free for grantees, and fully following open science principles. One can also publish non-traditional outputs such as data, methods and code articles there.

Would you agree that traditional scientific publishers will be the losers in the move to open science? A similar digital disruption made journalism a precarious occupation, caused a crisis that reverberated beyond the media business, creating fertile ground for fake news, disinformation and low quality of information. Aren’t you afraid of an open science movement that may inadvertently cause similar problems in the domain of scholarly publication?

Being a scientist – at least until tenure – is very precarious, so I can certainly empathise with journalists. But the traditional publishing houses are not being disrupted as much as perhaps we should have hoped for. They have to a large extent already made a move to an open access environment and have adapted their business models to the new system. The real disruption would be a change in the prestige game.

Of course, subscriptions to prestigious journals also sustain great scientific journalism and the operations of several scholarly societies with their travel grants, outreach programmes etc. But should these activities be funded by taxpayers’ money through library subscriptions or open access fees? Or should they find new ways of funding? These are difficult questions. For the time being the biggest publishing houses generate enormous profits that mainly go to shareholders. So I think there is a lot of room for reducing the cost of publishing without causing huge adverse effects. 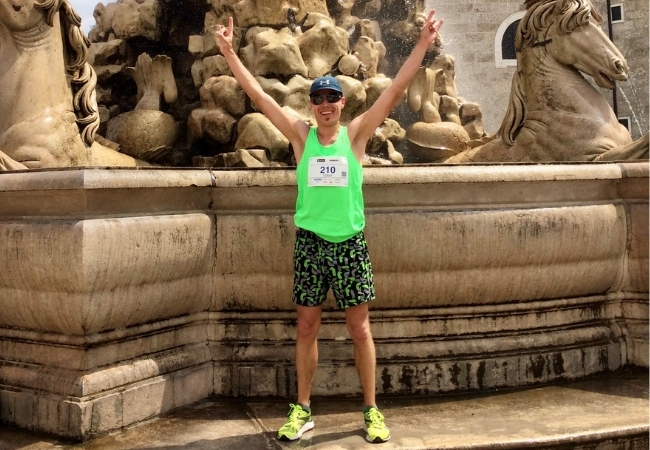 What key advice would you give to new ERC grantees?

Be as open as you can, publish as openly as you can, submit preprints and open data – but continue publishing in the journals that you think are the best for your career. No one has to become an open science martyr, you can be open without harming your career chances. But at the same time, recognize the deep flaws of the current system of evaluation and rewards and call for a reform – as an ERC grantee your voice carries weight.

“Be as open as you can, [but] you don’t have to become an open science martyr”

You were an ultra-marathon runner, you did a 100 km race. The move to open science is surely not a sprint but a long-distance run. In your opinion, where are we in this race?

It depends. In open access we are on the last stretch. I don’t think there will be much research that is not openly accessible in five years. When it comes to open data, it will take more time. We’re advancing but we are maybe half-way there. In other aspects, in cultural changes, we’re just getting started, and it’s hard to say when we will get to the end.

Like at the start of a marathon, you don’t know if you’re actually going to be able to do it but you have the incentive and the motivation. Like with my 100k, I was committed to finishing that one, it was painful and a long road but I was able to get to the end line. The same I think applies to open science.