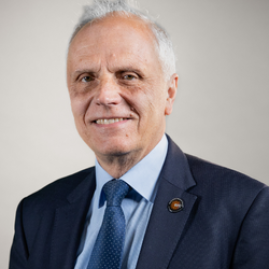 Andrzej Jajszczyk is Professor at the Department of Telecommunications, the AGH University of Science and Technology in Krakow, Poland and President of the Krakow Branch of the Polish Academy of Sciences. From 2011 to 2015 he served as the founding Director of the National Science Centre, a Polish research funding agency. He received Ph.D. from Poznan University of Technology in 1979. He was a visiting scientist at the University of Adelaide in Australia, Queen’s University in Kingston, Ontario, Canada, and Ecole Nationale Supérieure des Télécommunications de Bretagne, France.

His major achievements in the theory of connecting networks include reformulation of Benes's theory of rearrangeable networks, complementing the theory by introducing a new class of repackable networks and proving nonblocking properties of a class of multiconnection networks. He also proposed some new structures of photonic switching networks and networks composed of digital switching matrices. He also contributed to the theory of network survivability and proposed new architectures and protocols for flow-aware networks. He is the author or co-author of 12 books and over 300 research papers, as well as 19 patents. He also published over 80 papers on research funding and higher education. He has been a consultant to industry, telecommunications operators, and government agencies in Australia, Canada, China, France, Germany, India, Poland, and the USA.

He is 1998 IEEE Fellow, and was elected to the Polish Academy of Sciences and Academia Europaea. He was the founding editor of IEEE Global Communications and Editor-in-Chief of IEEE Communications Magazine. He was Associate Editor-in-Chief of CIC/IEEE China Communications. He held important positions in IEEE Communications Society, such as: Director of Magazines, Director of the Europe, Middle East and Africa region, Vice President – Technical Activities. In 2008, he received the Society’s Joseph LoCicero Award for Exemplary Service to Publications. The same year he received the Foundation for Polish Science Award.