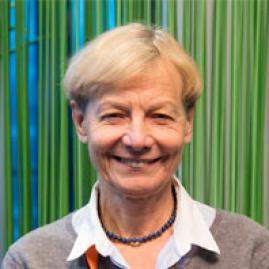 Barbara Romanowicz was born and educated in France, where she studied mathematics at the Ecole Normale Supérieure and holds a PhD degree in Geophysics from the University of Paris 7. Between 1982 and 1990, as a researcher at the CNRS, she developed GEOSCOPE, a then state-of-the-art global network of digital seismic stations for the study of earthquakes and the structure of the earth's interior. In 1991, she was appointed Director of the Berkeley Seismological Laboratory and professor in the Department of Earth and Planetary Science at UC Berkeley. During her directorship (until 2011), she helped establish a joint real time earthquake notification system for northern California between the BSL and the US Geological Survey. Her research interests include the study of deep earth structure and dynamics using seismological tools, and recently, implementing numerical seismic wavefield computations in seismic tomography. She also has an interest in earthquake processes and scaling laws, the development of modern broadband seismic and geophysical observatories on land and in the oceans. Among honors received, she was elected to the US National Academy of Sciences in 2005 and has recently been appointed to the chair of Physics of the Earth Interior at Collège de France in Paris.