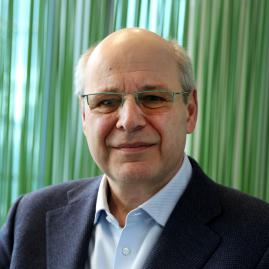 After graduating in Padua, Fabio Zwirner received a Ph.D. in Physics from the International School for Advanced Studies (SISSA) in Trieste in 1987. He was then postdoctoral fellow at the University of California Berkeley, Scientific Staff Member at CERN, Director of Research in the Italian National Institute for Nuclear Physics (INFN), Full Professor at the University of Rome La Sapienza.

He was Chairman of the CERN Scientific Policy Committee (2011-13) and of the High Energy Particle Physics Board of the European Physical Society (2009-11), and one of the four members of the Strategy Secretariat for the update of the European Strategy in Particle Physics (2012-13). Representing the Italian government, he chairs the Steering Committee of the International Centre for Theoretical Physics (ICTP) in Trieste, and he is a member of the Board of Directors of Scuola Galileiana, the Excellence School of the University of Padua. He was Divisional Associate Editor of Physical Review Letters (2002-8) and he is currently Editor of the Journal of High Energy Physics (JHEP).

His research has mostly dealt with the theory and phenomenology of the fundamental interactions, focusing on the mass generation for the weak gauge bosons, the quarks and the leptons, and the possible unification of gravity with the other forces at the quantum level. His main contributions concern the physics of electroweak interactions and of the Higgs boson, the properties of supersymmetric extensions of the Standard Model of particle physics, the theory of supersymmetry breaking, the compactifications of supergravity and superstring theories.

Professor Fabio Zwirner was Vice-President of the European Research Council from 01 Jan 2019 until 31 Dec 2020 and was responsible for the Physical sciences and Engineering domain.