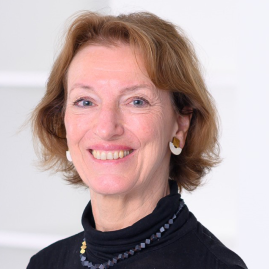 Professor Maria Leptin is the President of the European Research Council (took office from 1 November 2021).

Prior to that, Professor Leptin served as Director of EMBO from 2010-2021. She also established a research group in Heidelberg at the European Molecular Biology Laboratory (EMBL). The group studies the mechanics of shape determination during development.

After completing her studies in mathematics and biology at the University of Bonn and the University of Heidelberg, Professor Leptin worked for her PhD at the Basel Institute for Immunology, Switzerland (1979-1983) studying B-lymphocyte activation under the supervision of Fritz Melchers.

In 1984 she moved, as a post-doctoral fellow (1984-1987) to the Laboratory of Molecular Biology (LMB), Cambridge, UK, where she started her research on the embryonic development of Drosophila, joining the laboratory of Michael Wilcox. This work laid the foundations for her future work in the field of molecular morphogenesis. In 1988, she was appointed as staff scientist at the same institution. As visiting scientists in Pat O’Farrell's lab at the University of California, San Francisco (UCSF) she began her work on gastrulation which became the core of her research interests at the Max Planck Institute for Developmental Biology in Tübingen, Germany, where she worked as group leader (1989-1994).

In 1994, Maria Leptin became Professor at the Institute of Genetics, University of Cologne, Germany, where she still leads a research group. She spent sabbaticals as a visiting Professor at the École Normale Supérieure, Paris, France (2001) and as visiting scientist at the Wellcome Trust Sanger Institute, Hinxton, UK (2004-2005).

Professor Leptin is an elected member of EMBO, the Academia Europaea and the German National Academy of Sciences (Leopoldina), and an Honorary Fellow of the Academy of Medical Sciences. She is also Foreign Member of the Royal Society since May 2022.

Title
A selection of speeches