More than one in ten ERC funded researchers who responded to a survey say they had either created companies, transferred the results of their research to pre-existing companies, or  both.  Among the recipients of ERC Proof of Concept Grants, this tendency towards academic entrepreneurship is much higher – with half of them engaging in knowledge-transfer activities.

In November 2020 the ERCEA conducted a survey among the 9,270 Principal Investigators (PIs) who had received one or more ERC grants since its creation in 2007. The survey’s aim was to assess how the ERC fulfils an expectation that its funding will also contribute to driving innovation and business inventiveness. 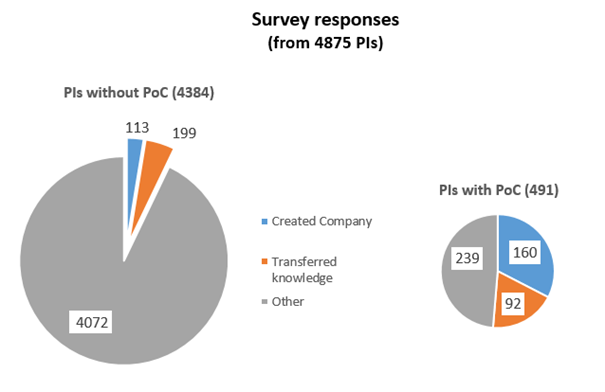 More than 560 ERC PIs (over 11% of respondents) declared that they had either created companies or transferred the results of their research to pre-existing companies (41 did both).

Around 10% of the PIs who responded to the survey had an ERC Proof of Concept (PoC) grant, a percentage that reflects the share of PIs with a PoC in the total population of ERC grantees.

The ERC Proof of Concept (PoC) grant is top up funding that can be awarded to ERC “core” grant-holders who intend to exploit their academic research results in order to introduce innovations. Their final goal is the generation of value for themselves, as well as socio-economic benefits for potential users.

However, the ERC PIs who also managed to obtain a PoC have a much higher tendency towards academic entrepreneurship. More than half of the PIs with a PoC have either created companies or transferred the results of their research to pre-existing companies, compared to only 7% among the PIs who do not have a PoC.

Among the non-PoC “academic entrepreneurs”, the preference goes towards knowledge transfer to pre-existing companies rather than company creation, while the opposite applies to PoC grantees.

The survey results and further desk-research provide valuable data on and key performance indicators of the creation of start-up companies, their industry of operation, their geographical location, the role of the PI, as well as data on Intellectual Property Rights (IPR)/licence transfer, Research and Development (R&D) contracts and consulting agreements with pre-existing companies.

*The classification of countries respects the situation at the end of the year 2020, when the survey was launched.

Further analysis of these knowledge transfers as well as of the created companies - their type, their size, year of foundation, further funding, patenting activities etc. - will provide valuable information on the impact of the research beyond science.