A new independent study on the output of frontier research funded by the ERC shows that 79% of projects were of major impact: 19% led to a breakthrough and 60% to a major scientific advance. Almost half of the projects have already left their mark on the economy, society and policy-making, whilst around three quarters are foreseen to do so on the medium- and long-term. Published today, the analysis confirms the results announced in 2016 and 2017, with even a certain increase in overall impact in the latest study. It also demonstrates the top quality of the research supported by the ERC.

"This review shows that 79% of ERC projects generate breakthroughs or major advances – this speaks volumes about the fantastic, but often unforeseeable, impact of blue sky research and the need to let first-class talent follow their scientific curiosity. It highlights once again that the type of risky top science that the European Research Council supports is a wise investment, which we need more of in order for Europe to thrive, be competitive at a global level and to deliverer tangible benefits for the population at large.", said Carlos Moedas, European Commissioner for Research, Science and Innovation.

ERC President Professor Jean-Pierre Bourguignon added: "After the first two reviews of this kind, the latest study again bears witness to the success of the ERC's funding strategy and peer review system, conceived and managed 'by scientists, for scientists'. Its model ensures that the very best research ideas proposed by determined researchers are funded. Without any pre-set policy priorities whatsoever, bottom-up research clearly has a positive impact on the economy and society, and can improve people's daily lives in countless ways." 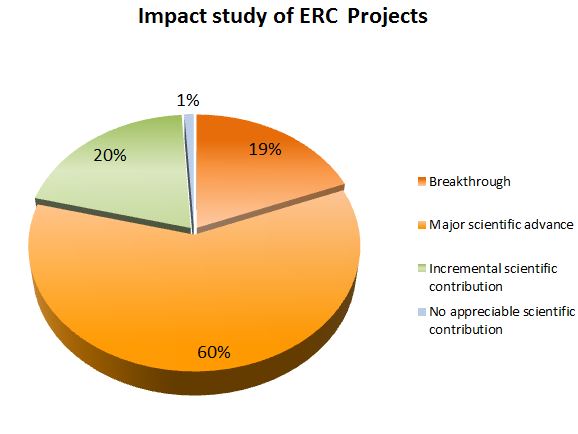 The study was conducted on a random sample of 223 Starting and Advanced Grant projects from a pool of 470 completed projects. It found that, in accordance with its mission, the ERC indeed funds high-risk/high-gain research. Taking risk pays off: scientifically daring projects are more prone to lead to higher impact, according to the study.

Only 21% of evaluated projects were considered as having incremental or no appreciable scientific contribution. Another finding is that many of the projects are interdisciplinary; around 70% have created innovative interactions across domains.

The analysis was carried out by 25 panels consisting of three to four independent high-level scientists each. The evaluators addressed questions related to, for example, scientific and other impact, the development of new methodologies, and interdisciplinarity.

These annual independent evaluations started in 2015, initiated by the ERC Scientific Council, which plans to conduct similar assessments over the coming years to provide a sound evaluation of the performance of ERC's funding schemes.

The European Research Council, set up by the European Union in 2007, is the premiere European funding organisation for excellent frontier research. Every year, it selects and funds the very best, creative researchers of any nationality and age, to run projects based in Europe.

To date, the ERC has funded over 8,000 top researchers at various stages of their careers. It offers four core grant schemes: Starting, Consolidator, Advanced and Synergy Grants. The ERC strives to attract top researchers from anywhere in the world to come to Europe.

The ERC is led by an independent governing body, the Scientific Council. The ERC President is Professor Jean-Pierre Bourguignon. The ERC has a budget of over €13 billion for the years 2014 to 2020 and is part of the EU research and innovation programme, Horizon 2020, for which European Commissioner for Research, Innovation and Science Carlos Moedas is responsible.