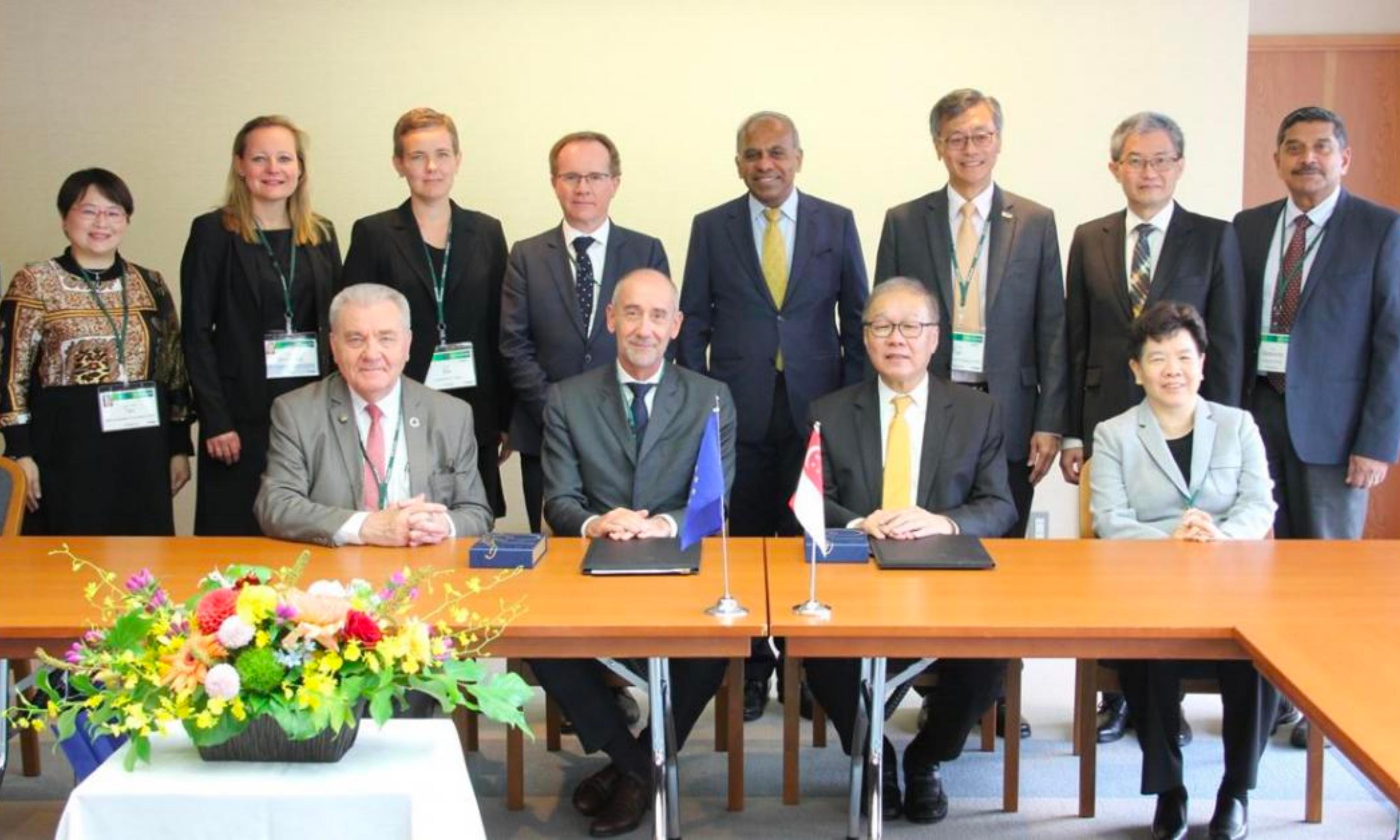 A new EU-Singapore initiative will encourage top Singaporean scientists to join research teams funded by the European Research Council (ERC). This agreement with the National Research Foundation Singapore (NRF) is the fourteenth international agreement of its kind. It forms part of the ERC’s global outreach strategy, which aims to make Europe a hub for research talent.

The initiative, officially called an Implementing Arrangement, was signed by the European Commission's Director-General for Research and Innovation, Jean-Eric Paquet, and the CEO of the NRF, Prof. Low Teck Seng, in the presence of ERC President Prof. Jean-Pierre Bourguignon and Singapore’s Permanent Secretary for National Research and Development and Chairman of the Agency for Science, Technology and Research, Ms Chan Lai Fung. This signing took place on 6 October on the margins of the Science and Technology in Society Forum in Kyoto, Japan. The new scheme aims to encourage high-caliber researchers supported by the NRF to make research visits to Europe, where they will temporarily work in ERC-funded teams.

Director-General Jean-Eric Paquet said: “Cutting-edge research holds the key to a better future for citizens in Europe and beyond, and global scientific cooperation is essential here. That is why I welcome this new initiative with Singapore, which hosts much scientific talent. It is a win-win for both sides as it will encourage further collaboration.”

The CEO of NRF Prof. Low Teck Seng said: “NRF welcomes the new visiting researcher collaborative scheme with the European Research Council. This initiative will facilitate exchange of ideas and research experiences among top research talent and benefit research efforts of both Singapore and the EU. We look forward to fostering deeper connections among research communities from both sides through the research visits by Singapore-based researchers and to catalyse opportunities for top ERC-funded researchers to spend time with their Singapore-based collaborators.”

ERC President Jean-Pierre Bourguignon said: “International scientific collaboration is fundamental to push the frontiers of knowledge together. Since its inception in 2007, the ERC has launched a string of agreements of this kind with funders around the globe that are R&I leaders. I am very pleased to see this new scheme to encourage Singapore-based researchers to join ERC teams. It both reflects the quality of research talent based in Singapore and confirms the ERC’s and Europe’s openness to the world and attractiveness to top scientists.”

Also present at the signing ceremony were amongst others Dr Subra Suresh, President of Singapore’s Nanyang Technological University (NTU) and signatory of the very first agreement of this kind between the ERC and the US National Science Foundation (2012), as well as Prof. Tan Eng Chye, President of the National University of Singapore.

Before the signing ceremony in Kyoto, the ERC President visited Singapore on 3 to 4 October to meet NRF leaders and to raise awareness of ERC funding opportunities in Europe through events organised by EURAXESS. This included a roundtable hosted by the EU Ambassador to Singapore, Barbara Plinkert, which enabled an in-depth exchange with Ambassadors to Singapore of EU Member States and the Presidents of e.g. NTU and NUS on the importance of international cooperation and mobility in science and technology.

The ERC offers long-term grants in Europe to excellent scientists of any nationality and in any field. To date, nine Singaporean researchers based in Europe have been awarded ERC grants, of which all are early- to mid-career researchers. This is the highest number of all ASEAN countries.

The European Research Council, set up by the European Union in 2007, is the premier European funding organisation for excellent frontier research. Every year, it selects and funds the very best, creative researchers of any nationality and age, to run projects in Europe.

To date, the ERC has funded over 9,000 top researchers at various stages of their careers. It offers four core grant schemes: Starting, Consolidator, Advanced and Synergy Grants. As of 2019, ERC Synergy Grants are also open to applicants based in host institutions outside Europe.

With grants open to talent of any nationality, the ERC aims to attract top researchers from anywhere in the world to come to Europe and encourages non-European scientists to join teams led by ERC grantees. Over 60,000 researchers and other professionals have been or are employed in ERC teams. Estimates show that around 17% of team members, who can also be based outside Europe, are non-European nationals.

The ERC is led by an independent governing body, the Scientific Council. The ERC President is Professor Jean-Pierre Bourguignon, whose mandate runs until the end of 2019. The ERC has a budget of over €13 billion for the years 2014 to 2020, part of Horizon 2020, for which European Commissioner for Research, Innovation and Science, Carlos Moedas, is responsible.