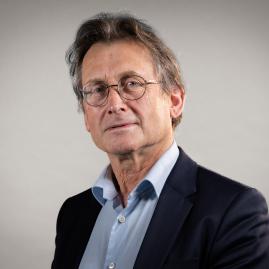 Ben L. Feringa was awarded the Nobel Prize in Chemistry in 2016 for the design and synthesis of molecular machines.

He obtained his PhD degree at the University of Groningen in the Netherlands under the guidance of Professor Hans Wynberg. After working as a research scientist at Shell in the Netherlands and at the Shell Biosciences Centre in the UK, he was appointed lecturer and in 1988 full professor at the University of Groningen and named the Jacobus H. van't Hoff Distinguished Professor of Molecular Sciences in 2004. He was elected Foreign Honorary member of the American Academy of Arts and Sciences and is member of the Royal Netherlands Academy of Arts and Sciences. In 2008 he was appointed Academy Professor and was knighted by Her Majesty the Queen of the Netherlands. Feringa's research has been recognized with a number of awards including the Koerber European Science Award (2003), the Spinoza Award (2004), the Prelog gold medal (2005), the Norrish Award of the ACS (2007), the Paracelsus medal (2008), the Chirality medal (2009),the RSC Organic Stereochemistry Award (2011), Humboldt Award (2012), the Grand Prix Scientifique Cino del Duca (French Academy 2012), the Marie Curie medal (2013) and the Nagoya Gold Medal (2013). The research interest includes stereochemistry, organic synthesis, asymmetric catalysis, optopharma, molecular switches and motors, self-assembly and molecular nanosystems.