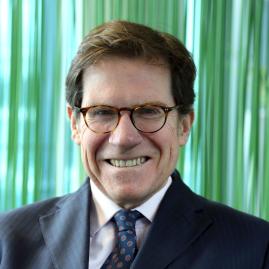 Giulio SUPERTI-FURGA
Current position:
Current position
Scientific Director of CeMM, the Research Center for Molecular Medicine of the Austrian Academy of Sciences, and Professor for Medical Systems Biology at the Medical University of Vienna

Giulio Superti-Furga, Ph.D., performed his undergraduate and graduate studies in Molecular Biology at the University of Zurich, at Genentech Inc. in San Francisco and at the IMP in Vienna. He was a postdoctoral fellow at EMBL Heidelberg and became Team Leader in 1995. From 1997 to 2000 he served as Guest Professor of Molecular Biology at the University of Bologna. In 2000, he co-founded the biotech company Cellzome Inc. and served as Scientific Director. Since 2005 he has been Director of CeMM in Vienna. From 2005 to 2014 Giulio Superti-Furga was a Visiting Professor of Molecular Pharmacology at the Medical University of Vienna, where he was appointed as Professor for Medical Systems Biology in 2015. In 2010 he co-founded the biotechnology company Haplogen GmbH in Vienna, a CeMM spin-off focused on haploid genetics.

Giulio Superti-Furga directs CeMM, the Research Center for Molecular Medicine of the Austrian Academy of Sciences in the middle of the large general hospital campus in Vienna, working on a precise and preventive medicine of the future by integrating basic research and clinical expertise to pursue pioneering diagnostic and therapeutic approaches. Among his major achievements to date are the elucidation of basic regulatory mechanisms of tyrosine kinases in human cancers, and the discovery of fundamental organization principles of the proteome and lipidome of higher organisms. His work on the organization of the eukaryotic proteome is among the most highly cited in the field.

Giulio Superti-Furga is a member of the Austrian Academy of Sciences, German Academy of Sciences Leopoldina, EMBO, European Academy of Cancer Sciences, and Academia Europaea. His scientific impact is complemented by his community work. He was serving as Chair of the board of the EMBL Alumni Association from 2008 to 2015, is a founding member of the EU-LIFE consortium (www.eu-life.eu), and has initiated “Genom Austria” (www.genomaustria.at), an educational citizen science project on genome sequencing allowing a wide public to consider and discuss the advantages and challenges of genomic medicine.