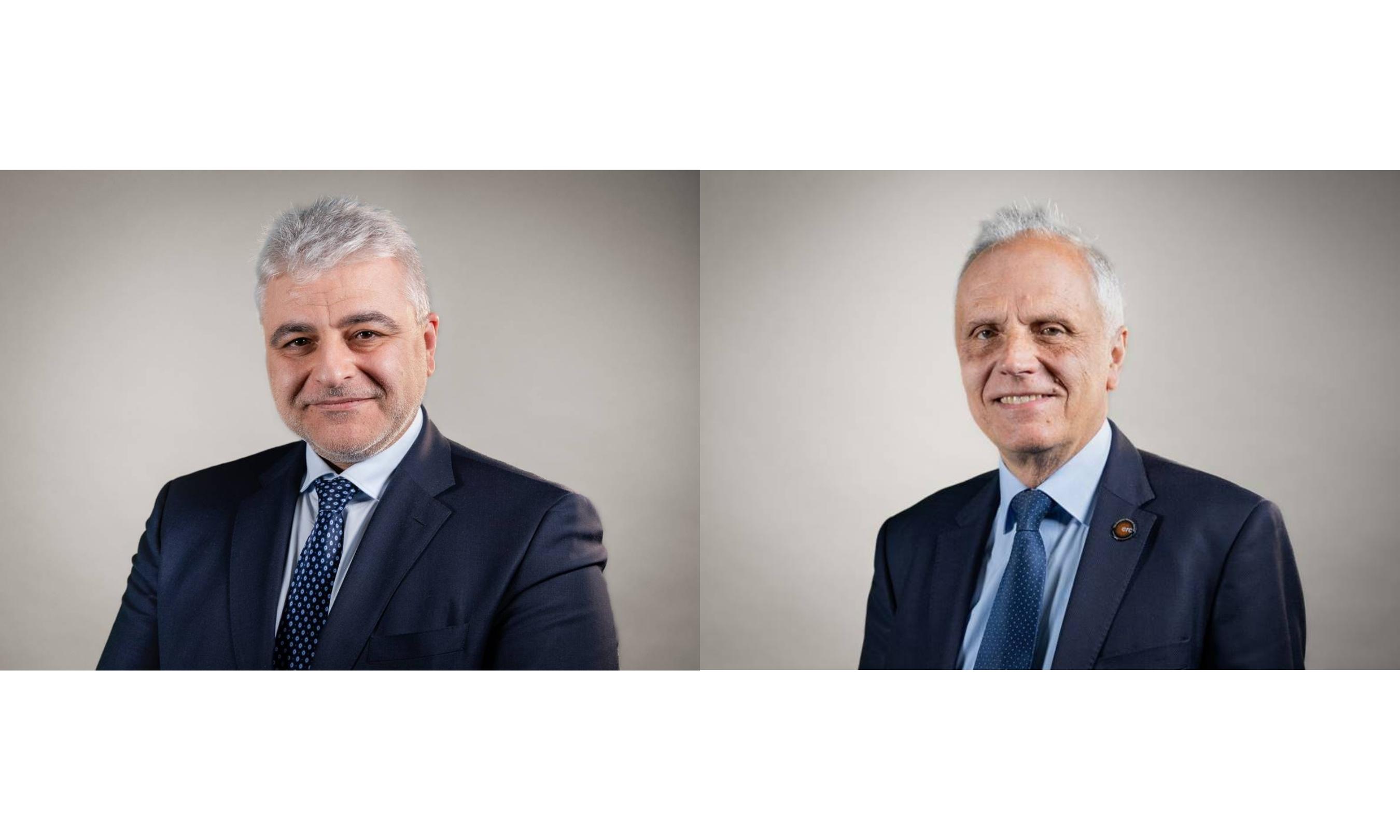 Professors Andrzej Jajszczyk and Nektarios Tavernarakis have been elected as the new Vice Presidents of the European Research Council (ERC). They will take up duties on 1 January 2021, alongside current Vice President Eveline Crone. Elected by the ERC Scientific Council, they will be in charge of ERC activities in the domains of Physical and Engineering Sciences and Life Sciences respectively.

Professor Andrzej Jajszczyk has been a member of the ERC Scientific Council since 2017. He is President of the Krakow Branch of the Polish Academy of Sciences and Professor at the Department of Telecommunications, the AGH University of Science and Technology in Krakow, Poland.

Professor Jajszczyk commented: “I am thrilled to continue my service to the ERC, now in a somewhat broader capacity. I appreciate this trust of the ERC Scientific Council – our governing body that stands strong and united, representing the research community across Europe and across all fields. It will be an honour to represent the domain of Physical Sciences and Engineering as ERC Vice President. The role played by the ERC in funding frontier, high risk-high gain research cannot be overestimated. We have to remember that this kind of research provides a fertile environment for innovation. It certainly contributes to putting Europe on the map in a world of ever-growing global competition.”

Professor Nektarios Tavernarakis has been an ERC Scientific Council member since 2016. He is Chairman of the Board of Directors at the Foundation for Research and Technology-Hellas (FORTH) and Professor of Molecular Systems Biology at the Medical School of the University of Crete, Heraklion, Greece.

Professor Tavernarakis remarked: “I am deeply honoured to have been elected ERC Vice-President for the Life Sciences domain. Having witnessed first-hand, as a grantee, the transformative impact of ERC on European science, I am wholeheartedly committed to contributing to its mission in this new role. The ERC is not merely a success story in the framework of the European ideal; it stands as a radiant paradigm of how investment in frontier research can reap enormous benefits for society at large. I am looking forward to working closely with my Scientific Council colleagues, across all three domains, to serve science by building on the ERC’s legacy of fostering excellent research. Today, the ERC's support for bottom up, blue skies research is more relevant than ever. This strategy can effectively protect us in the face of unpredictable threats, and address diverse and complex global challenges."

The ERC is chaired by the ERC President - currently Professor Jean-Pierre Bourguignon - and has three Vice Presidents, who are equally the Vice-Chairs of the ERC Scientific Council. They represent the three ERC domains. The current Vice-President Professor Eveline Crone (Social Sciences and Humanities) will continue her mandate. Nektarios Tavernarakis and Andrzej Jajszczyk will replace Professor Dame Janet Thornton (Life Sciences) and Professor Fabio Zwirner (Physical Sciences and Engineering), whose mandates end in December 2020.

The ERC Scientific Council is composed of 22 distinguished scientists and scholars representing the European scientific community. Their main role is setting the ERC strategy and selecting the peer review evaluators.

Current position: Professor of Molecular Systems Biology at the Medical School of the University of Crete, Heraklion, Greece

Nektarios Tavernarakis holds a PhD degree in Molecular Genetics from the University of Crete, Greece. He trained as a postdoctoral researcher at Rutgers University in New Jersey, USA His research focuses on the molecular mechanisms of necrotic cell death and neurodegeneration, the interplay between cellular metabolism and ageing, the mechanisms of sensory transduction and integration by the nervous system, and the development of novel genetic tools for biomedical research.

He is an elected member of the European Molecular Biology Organization (EMBO), Academia Europaea, the German National Academy of Sciences-Leopoldina, the European Academy of Sciences and Arts, and the Academy of Athens. He is also the Chairman of the Board of Directors at the Foundation for Research and Technology-Hellas, and Professor of Molecular Systems Biology at the Medical School of the University of Crete. He is also the founder and Director of the Graduate Program in Bioinformatics of the University of Crete, and Research Director at the Institute of Molecular Biology and Biotechnology, where he is heading the Neurogenetics and Ageing Laboratory. Since 2020, he is Member of the European Institute of Innovation and Technology (EIT) Governing Board.

He is the recipient of two ERC Advanced Grants, an ERC Proof of Concept Grant, the EMBO Young Investigator award, the Alexander von Humboldt Foundation, Friedrich Wilhelm Bessel research award, the Bodossaki Foundation Scientific Prize for Medicine and Biology, the Empeirikeion Foundation Academic Excellence Prize, the BioMedical Research Award of the Academy of Athens, the Galien Scientific Research Award, and the Helmholtz International Fellow Award among others.

In August 2016, the European Commission appointed him to the ERC Scientific Council.

Current position: Professor at the Department of Telecommunications, the AGH University of Science and Technology in Krakow, Poland

Andrzej Jajszczyk received a PhD degree from Poznan University of Technology in 1979. He was a visiting scientist at the University of Adelaide in Australia, Queen’s University in Kingston, Ontario, Canada, and Ecole Nationale Supérieure des Télécommunications de Bretagne, France.

His major achievements in the theory of connecting networks include reformulation of Benes's theory of rearrangeable networks, complementing the theory by introducing a new class of repackable networks and proving nonblocking properties of a class of multiconnection networks. He also contributed to the theory of network survivability and proposed new architectures and protocols for flow-aware networks.

He is 1999 IEEE Fellow and an elected member of the Polish Academy of Sciences, the Polish Academy of Arts and Sciences, and Academia Europaea. He was the founding editor of IEEE Global Communications and Editor-in-Chief of IEEE Communications Magazine. From 2011 to 2015 he served as the founding Director of the National Science Centre, a Polish research funding agency. He is the recipient of the Copernicus Award, Siemens Award, the IEEE Communications Society Joseph LoCicero Award, Janusz Groszkowski Medal, and the Foundation for Polish Science Award among others.

In January 2017, the European Commission appointed him to the ERC Scientific Council.

The European Research Council, set up by the European Union in 2007, is the premiere European funding organisation for excellent frontier research. Every year, it selects and funds the very best, creative researchers of any nationality and age, to run projects based in Europe. The ERC offers four core grant schemes: Starting, Consolidator, Advanced and Synergy Grants. With its additional Proof of Concept grant scheme, the ERC helps grantees to bridge the gap between their pioneering research and early phases of its commercialisation.

To date, the ERC has funded over 9,500 top researchers at various stages of their careers, and over 70,000 postdoctoral fellows, PhD students and other staff working in their research teams. The ERC strives to attract top researchers from anywhere in the world to come to Europe.

The ERC is led by an independent governing body, the Scientific Council. The ERC President is Professor Jean-Pierre Bourguignon. The overall ERC budget from 2014 to 2020 is more than €13 billion, as part of the Horizon 2020 programme, for which the European Commissioner for Innovation, Research, Culture, Education and Youth, Mariya Gabriel is responsible.